During his early days Bob had worked in British Columbia in the woods, but went on to a career in biochemistry at several universities.  He was not planning on being a tree farmer in his retirement, but he felt that creating or restoring a forest would be a satisfying project. After looking at several properties and deciding climbing around in slash wouldn’t be fun, he and his wife Kazuko purchased a parcel of poor quality, neglected pasture land in the Van Zandt area of Whatcom County, in the Nooksack River watershed and the foothills of Mount Baker. Old cedar stumps and some middle-aged spruce seemed to suggest that it once had been a lowland cedar-spruce forest.

Over the last 25 years, 30,000 trees have been planted on the tree farm and the tree farm now plays an important role in providing habitat for endangered salmon runs and the endangered Oregon spotted frog.  They were recognized for their efforts in May 2022 by being named Washington State Tree Farmers of the Year for 2022. 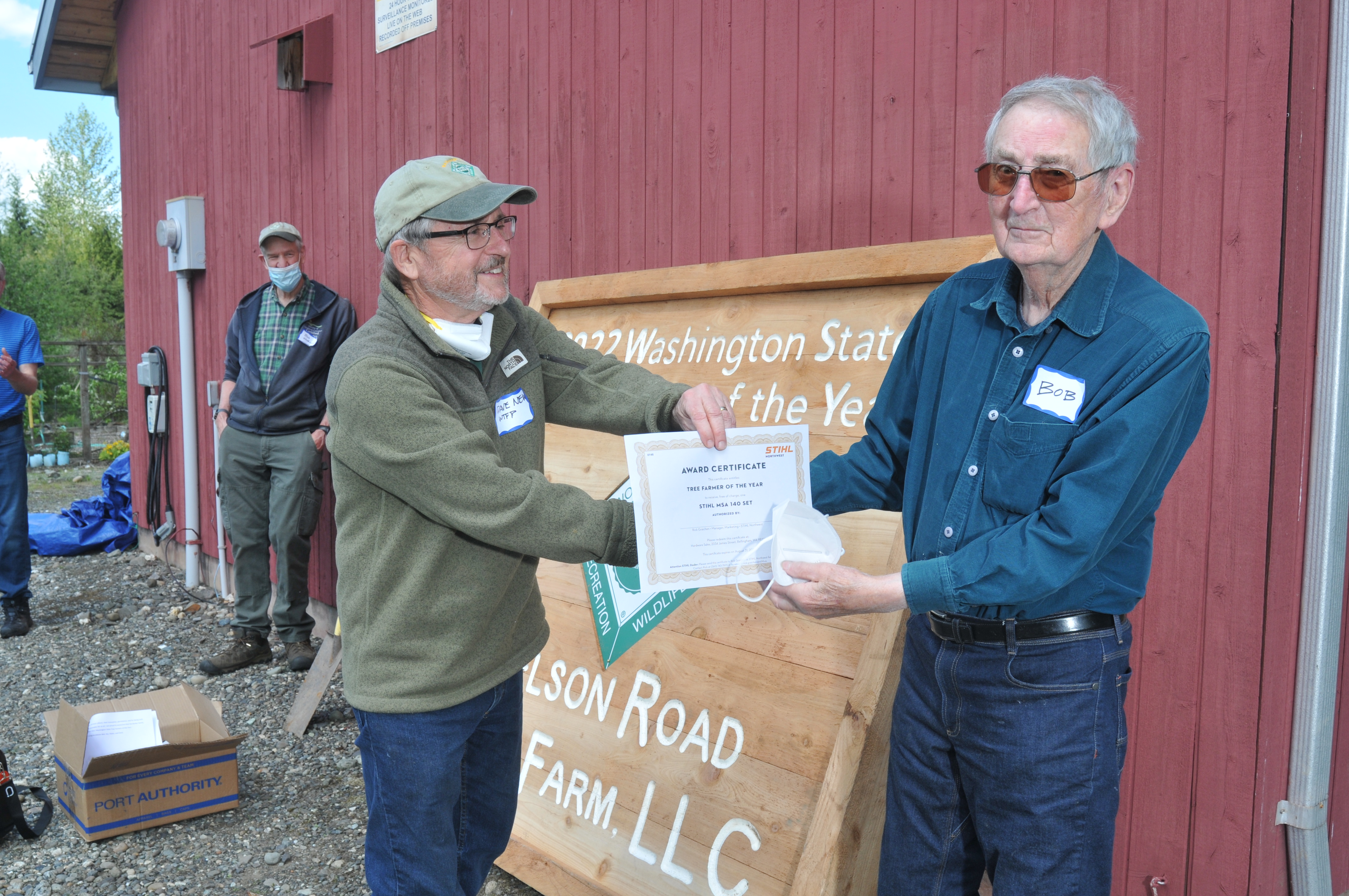 With advice from Boyd Norton of the DNR and John Gillies of the NRCS he drew up a plan and began what he thought would be a pretty easy conversion of marginal pasture to forest. The property included Black Slough that was recognized as important off channel habitat of the South Fork of the Nooksack River for several fish species, including some endangered runs.  Over the years Bob gained restoration knowledge from a variety of agencies and groups including Whatcom Conservation District, NRCS, WFFA, DNR Forest Stewardship, Tree Farm Program, and others.  He began preparing the fields for the first planting of seedlings.

It did not take long for his first challenge to emerge.  The population boom of field mice (voles) resulted in most of his initial plantings being destroyed. And the seed bank in the old pasture took over.  This is where Bob’s determination and scientific ingenuity kicked in.  After trying wire mesh and PVC spirals he tested using plastic blue tubes around each seedling for protection from the mice.  The tubes also helped to mark the location of the seedlings making it easier to mow, weed eat and spot spray around each tree.  The “blue tubes” are now widely used for riparian and restoration plantings.  Another issue hindering seedling survival was the high water table and wet soils. Bob came up with the idea of using an excavator to build small mounds to plant the seedling on for initial establishment.  This idea ran into resistance from several regulator agencies.  After many discussions and negotiations the technique of “deleveling” was successfully used to start new seedlings. The puddles from the deleveling and created small ponds led to another interesting restoration success.  These ponds became habitat for state listed endangered Oregon Spotted Frogs.  He has continued to work with the Washington Department of Fish and Wildlife in their recovery.

Bob has focused on planting seedlings of several different species to restore his property back to a diverse lowland forest environment that will survive environmental changes and pests.  The transition involve dealing with beaver who follow the dictum “If you plant it we will come”, infestations of spruce weevils that turned most of the spruce into bushes, elk damage, and blackberries, thistles and reed canary grass.  After 25 years of hard work, a maturing forest has been established.  His collaboration with the local conservation agencies and groups, along with other landowners has greatly improved forest riparian restoration efforts in this area.  He has been an influential leader through sharing his knowledge and by the example he has set on his tree farm.

See more about them in these videos and articles.

Article and photos about the tour held May 21, 2022 on the property.