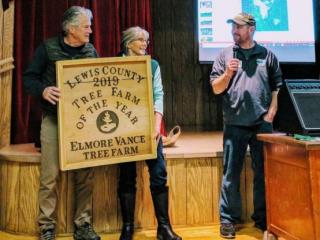 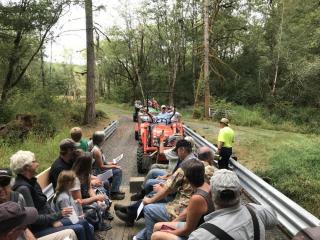 The tour of the Heitzmann Tree Farm was a tractor-drawn hayride. 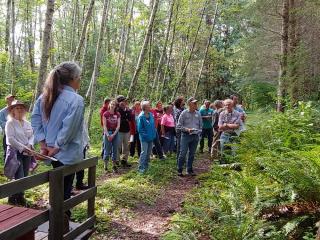 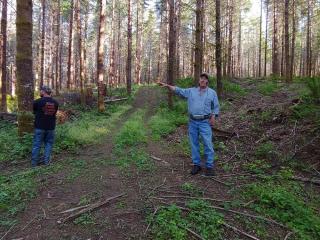 Chris Clowe talks about the thinning that was done on his stand. 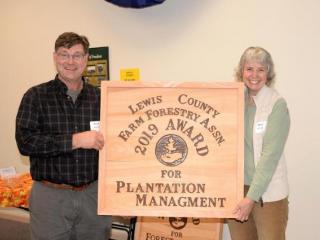 Bruce & Mary McDonald with their 2019 award for Plantation Management 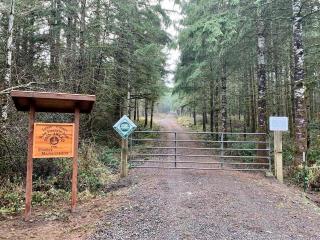 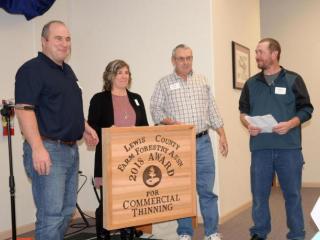 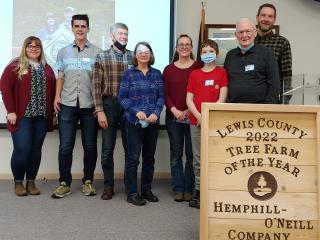 O'Neill family and staff being recognized as Lewis County Tree Farmers of the Year for 2022. What:          Picnic and Twilight Tour of Hamilton Tree Farm

Driving Directions: From the Newaukum Grange on Highway 603, turn on to Brown Road East and continue 1/1-2 miles.  Watch for orange Forestry Tour signs and a Hamilton Tree Farm sign on the left.

Details on Tour: A half mile walk will lead us through a 90-year-old stand where Reggie has underplanted 4000 western red cedar, a 70-year-old stand, a 15-year-old stand that has been thinned and pruned, a 30-year old stand that needs to be thinned, and a small brushy patch where he has struggled with the deer to get Douglas-fir established.

Details on the Picnic:  Some people have concerns about potluck food, so we are going to try a totally catered picnic this year.  The main dish will be chicken, plus sides, beverages, and dessert. You only need to bring yourselves and, if it is convenient, a lawn chair for yourselves.  A raffle drawing and live entertainment are also on the agenda. An RSVP to Donna Loucks, loucksd@localaccess.com or 360-736-2147, would be appreciated so that we can be sure to have enough food, but it is not required. A specific fee will not be collected but contributions towards the meal will be gladly accepted.

You are welcome to come to both the potluck and the tour, or only one part of the event.  Feel free to invite an interested friend or neighbor who is a potential member of WFFA!

Lewis County FFA is co-hosting another tour this month with Grays Harbor, Pacific and South Sound Chapters.  The property is located near Porter.

The Boyers own 4 parcels of land, one dating back 6 generations to the 1880’s.  They live on their 51.3 acre Grays Harbor County tree farm.  Since 2015, they have completed 3 harvests totaling 20 acres followed by planting nearly 10,000 seedlings of 13 different tree species. The tour will be a 0.9 mile walking loop with 4 “Stop & Talks”.  Vehicles can accommodate those unable to walk the distance. Including all is the goal.

Driving Directions: On Highway 12, between Oakville and Elma (between mileposts 27 & 28 at Porter) turn onto Butler Mill Road. Drive 0.3 miles, then turn right uphill onto our private blacktop driveway at the Forestry Tour sign. (Mail box has #68). Continue up our road until a greeter shows you where to park.

An RSVP to mercboyer@gmail.com would be appreciated but is not required.

The Grays Harbor Chapter of WFFA is providing snacks and refreshment. Restroom facilities will be available. The tour is outside. Please take whatever COVID precautions that keep you comfortable.

June Hansen passed away May 11, 2022, 7 weeks before her 102nd birthday. She came to Lewis County as an extension agent for Washington State University, and worked teaching food preservation classes and organizing 4-H clubs. She met Steve Hansen in the Extension office and they married in 1956.  They spent every weekend planting trees by hand on their farm east of Onalaska. Steve was one of the founding members of Lewis County Farm Forestry Association and was active in the association until his death in 1986. Years later, June and her daughter Heather won awards for Reforestation and Lewis County Tree Farmer of the Year for those plantations.

Bryon Loucks discussion their ongoing problems with deer browse and rubbing damage and showed some of the products they have used to prevent it, specifically Vexar on western redcedar seedlings, and netting and repellents on Douglas-fir.  In 2020, 15 acres was harvested that had root rot issues.  The decision was made to plant cedar and to fence it rather than installing Vexar tubes.  Western redcedar and Port Orford cedar were planted at a high stocking level in anticipation of getting revenue from boughs in the early years.  Attendees were able to see the 8 foot high fence, the recently planted seedlings, and the herbaceous vegetation which has come in quickly despite a site preparation spray.

Bryon then showed the recent Timber Sale of 37 acres and talked about the timber sale process, which was the first time the Loucks had used this harvest option.  Previously they have always hired a logger and done their own marketing.  Anyone interested in learning more was referred to the “Marketing and Final Harvest” chapter of Forest Management for Small Landowners, written by Bryon and available on the WFFA web site.

If you missed the presentation by Kelly Verd and Kenna Fosnacht's What's happening in the Lewis County Conservation District, it can be viewed on YouTube.

The first indoor educational meeting of the Lewis County Farm Forestry Association in almost 2 years was held at the Veterans Memorial Museum.  Following the election of officers, members of the O'Neill family, owners of Hemphill O'Neil Company, were presented with a cedar sign and recognized as Lewis County Tree Farmers of the Year for 2022.  The presentation that was given about their property can be viewed here.

Jenny Knoth, member of the Ag/Forestry Leadership Program Class 41 gave a presentation about their international trip to Cambodia and Vietnam in early 2020.  It can be viewed here.inlock

The Lewis County Farm Forestry Association meets on the 3rd Tuesday of each month, except December.

Educational meetings are held in the Lewis County Courthouse basement conference room in January, March, April, May, and October at 7 p.m.

Twilight tours are held in June, July, August and September at 6:30 p.m.

Two dinner meetings are held at other locations: the Awards Banquet in November and the Annual Meeting in February.

Membership in a local chapter is included when you join WFFA, and you may also join more than one chapter.

LCFFA member Lorie Spogen was featured in a recent article in The Chronicle for the preservation of an old cemetery on forest land that she and her husband Mark purchased.  We think of "cultural resources" as Native American artifacts, but the graves and headstones of early pioneer settlers are also cultural sites that should be preserved.  Read the full article here.

Dennis Hadaller, LCFFA member and former Lewis County Commissioner, passed away December 28, 2021. He was involved in the logging industry for his whole life and once served as president of the Washington Contract Loggers Association. Read his obituary here.

Audrey Oxley passed away July 10, 2021.  She and her husband Derald were active members in Lewis County Farm Forestry Association for over 50 years.  Derald first served as President in 1959 and again in 1974, and served as treasurer for many more years.  They lived on their Fir Acres Tree Farm, which was recognized as Lewis County Tree Farmer of the Year in 1998.

Over 80 members and guests attended a brief presentation by Washington Tree Farm Program's Bob Obideski to Chuck and Nan Higgins in front of the large Washington State Tree Farmer of the Year sign that had been delivered to them earlier.  Then Chuck led a tour of the property and described many of the difficulties he has had establishing a vigorous forest in areas that were poorly stocked and overgrown.

The 75 attendees were divided into 3 groups who took different routes around the Cowlitz Ridge parcel.  Ann Stinson and Lou Jean Clark led walking tours, while Doug Stinson narrated the group that rode in trailers.  Following the tour, participants enjoyed getting together for the first time in many months around a potluck dinner.

Numerous raffle prizes acquired from local businesses were distributed.  Dale Agnew won a pole saw donated by RSG and Uriah Kennedy won a chain saw donated by Service Saw.  We appreciate the donations from all of the companies and individuals that allow us to support chapter activities without any other fund-raising activities.

Mike Warjone of Port Blakely hosted a tour for over sixty members of Port Blakely’s 28 acre, 9 year old western red cedar plantation in Winston Creek in East Lewis County. The plantation was fenced for the first six years to prevent animal browse. Mike explained the reasoning and justification for constructing the fence as well as offering what he has learned and what he would do differently on the next fence project. There were lots of questions and answers and some good conversations pertaining to cedar planting.

Eric Cohen of Port Blakely talked about fertilizing Douglas-fir.  His presentation slides give much more detail, but the essential points were:

1)  It isn't worth fertilizing all soils, only glacial soils that aren't really high site;

3) Just do one treatment about 10 years before harvest.

Kent Jones of Resource Contractors LLC told us about the kinds of red alder trees that he purchases to be sliced.  They must have a 13 inches minimum diameter at the small end and be very clear of knots.  If you have trees that meet this criteria, he is paying a very good price.  The biggest problem is that most small land owners harvest in the summer, and he does not buy alder when the weather gets hot because of its rapid deterioration. He also buys Douglas-fir and western red cedar poles for Oeser Company in Bellingham.  If you would like to listen to his presentation, you can do so here.

On February 19, members enjoyed a fried chicken dinner at the Oakview Grange and re-elected Ricky Kuykendall and Chuck Higgins to Board positions.  The 2019 Lewis County Tree Farmer of the Year Award was presented to the Elmore Vance Tree Farm.

Micheal Sprouffske of Class 39 of the Washington Agriculture and Forestry Leadership Program spoke on their international trip to Greece & Italy.

At our annual awards banquet, 3 family forest owners were recognized for their good forest practices through multiple generations.  Those recognized were: Shirley Heitzmann, Elmer and Nancy Laulainen for Forest Stewardship; Bill and Mike Merriman for Forest Management, and Chris and Melanie Clowe for Commercial Thinning. Each received a large cedar sign that they can proudly display.

October 2018 Meeting: Who will buy my oversized logs?

Rich Nelson of Millwood Timber, Inc. described an interesting market for the oversized, ugly logs that no one else wants.  His company puts them into containers in Tumwater and ships them to China, where they are transported by truck considerable distances to the interior of the country to be made into coffins.  Chinese people who live in cities must be cremated, but those who live on their land in the country can still be buried in family plots on their own land.  They like to have single boards for each section of the coffin, so they like our oversized logs.  Defect isn’t critical because they can putty over it and paint the coffin.

If you missed the presentation and would like to hear it and see some of his photos, you can view it here.